Grading Systems From Around The World 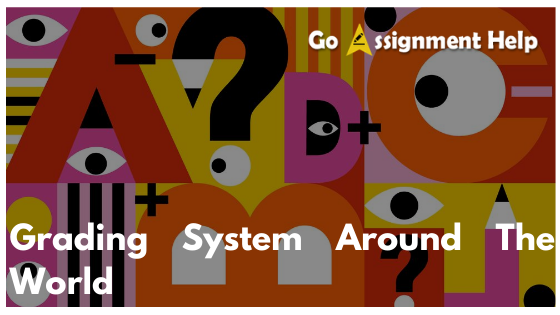 GoAssignmentHelp adopts a rigorous training process for all our academic experts. Since we are into online assignment writing business, our writers need to be well aware of the grading systems, marking schemes, assignment writing guidelines, academic writing and referencing styles worldwide to be at the top of their game.

Over the years, we have constantly endeavoured to help our student clients move from good grades to the best grades. And understanding how the education system works in a country helps us to write better-suited assignments for a student from there. Here is a quick glimpse of different grading systems followed around the world.

1. Grading System in the UK

The grading system in the UK for higher education involves ‘letter grading’. Based on their performance, the students are given a grade from A to F. A represents an outstanding performance while F represents that they could not pass the examination.

Here’s a table showing what your grade means if you are studying in a UK university or college.

Higher education degrees and qualifications from UK universities are recognised by employers worldwide. But you cannot expect such opportunities with just merit. Our UK assignment help experts have helped students make a jump from satisfactory C grades to outstanding A grades. Connect with them right away to make the same happen for you.

2. Grading System in the USA

The US grading system includes letter grades which are provided to the students based on the percentage of their scores in the exams. Here’s a table to represent the same:

However, this grading system in the USA has another factor called the GPA or Grade Point Average. This is calculated on a scale of 0-4 and is used in almost everything from applying for scholarships to joining clubs and getting admission.

The average GPA of college graduates in the USA is around 3.5 or B grade. But what if we say we can help you prepare an assignment that can get you above average GPA? We have assignment experts from the top US universities. They understand the expectations of US higher education to the core. Seeking their guidance could be of umpteen help for you.

The universities in Australia use two kinds of grading systems. Both these are letter-based. Here is how they are represented.

Let’s not forget the GPA and ATAR!

Australia also uses the GPA system at times. Here is how it is represented:

Another important academic achievement in Australia is the ATAR or Australian Tertiary Admission Rank. It is a number between 0.00 and 99.95. This number indicates the relative position of a student amongst the other students of the same age group.

There are different grading criteria in Australia. With us, you can find assignment help in Australia and subject matter experts who have been trained as per all these criteria. They understand how these grading systems work and have helped hundreds of students in achieving an HD grade. Connect with our Australian experts today for assignment help.

Over recent years Germany has been a popular destination for international students because of its worldwide ranking universities, a wide variety of courses and high education standards. Many universities in Germany charge no or very low tuition fees which attract many students.

German universities use a number-based grading system where students receive grades from 1-6. Here’s how these grades are represented.

In the table above, you would see ECTS which is the European Credit Transfer and Accumulation System. It is a common credit system that is used in European countries such as Spain and France. So, even if the European countries have a different grading system of their own, students can use the ECTS to get admission anywhere they prefer. Consult our assignment experts to learn more about getting a higher ECTS grade.

5. Grading System in the Netherlands

Canada is the third most popular destination for international students. However, understanding its grading system can be a little tricky in the first place as every state has an independent grading system.

No matter which state you study in Canada, our assignment help experts can help you score an A+ grade. We have got native Canadian academic writers and subject experts from top universities of Canada. We can help you create topnotch assignments and elevate your academic performance in no time.

Understanding the grading patterns of your institution is required to understand what you need to focus upon while creating your assignments or while preparing for your exams. But there can be times when you need a little help!

GoAssignmentHelp has assignment writers and subject experts from the best universities around the world. Our experts understand what it takes to elevate a student’s grade and provide effective assignments and study material accordingly.

We have helped thousands of students achieve their desired grades and we will be glad to help you too. Just send us a message or fill out the form on our website to know to seek instant help with your college/university assignments.

0 responses on "Grading Systems From Around The World"